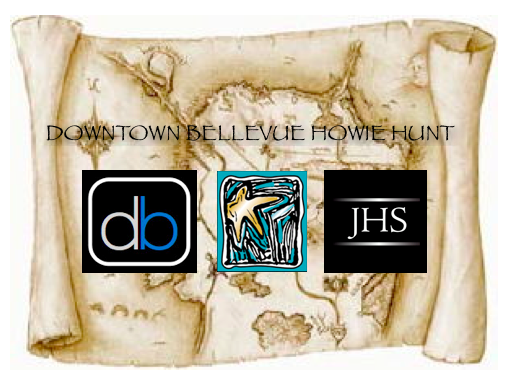 John Howie has heard over and over how much fun was had during the first Downtown Bellevue Howie Hunt, held in early March. The competition was hot and the stakes were high, so the always competitive and game loving Chef, in conjunction with the Bellevue Downtown Network, has agreed to another late summer round of the lunchtime treasure hunt that left entrants begging for more.

Beginning Tuesday, August 16th, for two consecutive weeks on Tuesdays, Wednesdays and Thursdays, four rubber burgers or four toy sushi will be hidden somewhere in downtown Bellevue. Clues to their whereabouts will be posted at 11:00 a.m. on those days through the our email list (sign-up here), on Facebook, or on Twitter. The lucky discoverers will have until the end of September to redeem their findings for any lunch sandwich at John Howie Steak located in The Shops at The Bravern (the burger) or any two raw bar lunch menu items (up to a $20 value) at Seastar Restaurant & Raw Bar located in the Civica Building (the sushi). Seastar’s raw bar lunch menu includes a wide array of deli salads and sandwiches as well as sushi, poke and sashimi.

As aspiring dining detectives have found, the clue driven Howie Hunt takes them on a merry chase throughout the heart of Bellevue’s retail area, involving many of the merchants. To add a little more spice to the game, Howie has added another element for participants. Whether or not they have been the first to solve the daily clue and claim a prize, if they take a self-photo at the destination, “like” and post it on either the John Howie Steak Facebook page or Seastar Facebook page, they are eligible to win an even bigger prize. At end of contest, one snapshot will be chosen from each restaurant page and the lucky photographer will receive a $200 gift certificate.

Chef John is still missing 3 miniature starfish and 3 toy cows that were claimed during the original Howie Hunt. These Howie Hoarders are still welcome to redeem their goodies for a salmon lunch at Seastar or Steak Frites at John Howie Steak.

Giveaway dates are August 16 – 18 and 23 – 25, with redemption by September 30, 2011. Individuals may only redeem one rubber hamburger or toy sushi during the entire length of the promotion. Winners must bring in and surrender the toys to be awarded their winnings.