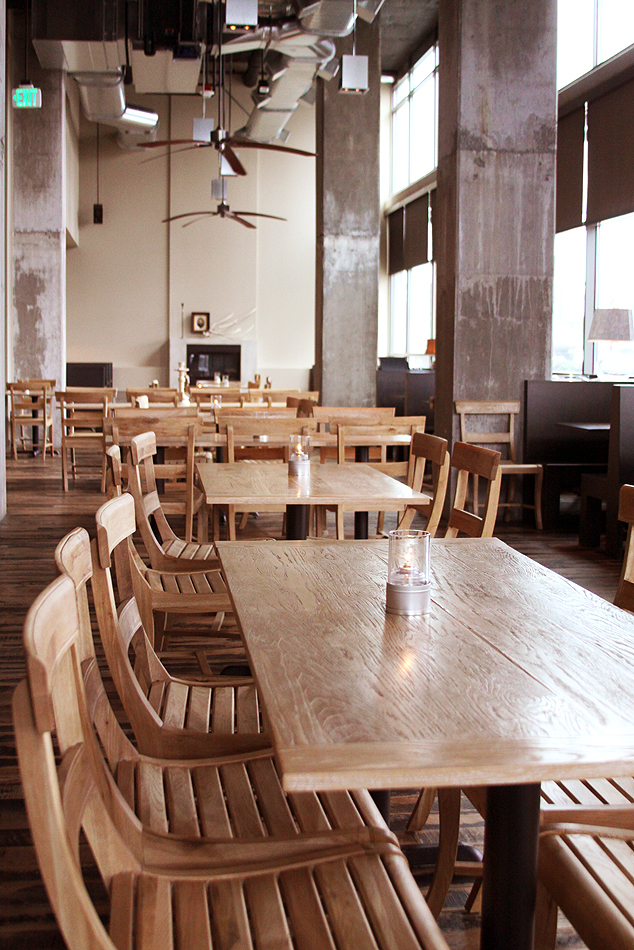 You see the word “gastropub” thrown around a great deal with restaurants and bars in the area, and despite the buzz-worthy terminology, it just refers to a casual neighborhood spot that serves spirits and food of quality and care in preparation. Black Bottle Postern, the newest neighbor to move into the Downtown Bellevue area, does just that – it’s a smart neighborhood bar with an appreciation for what’s in the glass as well as what’s on the plate.

Branching out from the original Belltown Black Bottle, this Eastside version isn’t an exact clone of its Seattle sibling – most obviously, the space is quite large and open, with plenty of booths, tables and the barside seating all in a single area, framed by tall windows and a fireplace on the far end of the room. Located in the southeast corner of the Avalon Towers building facing Bellevue Way, it’s close enough to the nexus of the Bellevue Collection to easily walk over, but far enough to comfortably inhabit its own space and not be inundated with mall traffic. It’s the place you want to grab a table with some friends and order several plates of food and a couple bottles of wine to share for a relaxing evening.

What also separates Postern from its original location is its menu. Longtime favorites remain like their “blasted” broccoli – a side of seasoned broccoli made crisp and smoky with a quick char under a flame. Postern’s menu has some different options, like a rich gorgonzola cream chicken and the bulgur wheat harissa lamb meatballs. There’s a little more cozy comfort tucked into Postern’s food options, but still in line with its gastro-tavern concept that emphasizes sustainability and attention to flavor combinations. Their menu is divided into basic groups: meat, seafood, veggies, flatbread, sweets, and “also” which are small appetizer bites. The meat dishes are generally entrée-sized and good for one person, but if you’re looking easy shareables, seafood items like their seven spice shrimp, yellowfin tuna sashimi poke, or oysters are all perfect for a group. For vegetarian and omnivores alike, the Black Bottle favorite is their flatbreads – long, rectangular crispy pizzas served in a tart pan, cut into several wedges and layered with a variety of vegetables or meat. The toppings range from rainbow chard with duck sausage and shiitake mushrooms, to an olive, feta and roasted tomato combination. A Postern exclusive is their simply elegant pear and gorgonzola, a sweet-savory flatbread that has thin slices of pear piled on a creamy layer of melted gorgonzola, all topped with crisped, caramelized onions. Overall, Postern’s food is prepared to allow the ingredients to speak for themselves, so make it a point to try something outside of your after-work food comfort zone – eschew the typical burger and fries and try the sardines namban or a plate of the pork belly and kimchi. These are items that few of the restaurants in the Downtown Bellevue area are serving, and this would be the place to eat with a spirited appetite.

Speaking of spirits, as Black Bottle Postern is a true tavern (21 and over only), it holds its drinks in high regard. The liquor is all top-shelf, and you’ll see several locally-made spirits and other hard to find bottles nestled along their bar wall. They have a few signature cocktails including the Major Danger, a lemondrop infused with fresh strawberry, and you can see Major Danger himself, as the owners named the drink after the nicknamed whimsical portrait of a rabbit in soldier’s garb set in the center of the bar wall. Postern’s beers tend to favor regional breweries, but also have unique offerings like the Left Hand Milk Stout, a creamy cocoa-coffee flavored stout from Colorado, served with a nitro pour. They also have a thoughtful selection of full-bodied wines, mostly reds, again with a nice preference towards the Washington wineries. Black Bottle Postern is another bar that’s using the wine on tap technology, keeping their more popular selections available for quick glass pours or carafes. While they have no happy hour, their prices are set from open till close (3pm – 2am every day), with beer ranging from $4-$6, wine glass pours $4-$10, and their premium well drinks a consistent $5. Combined with their food menu which ranges from $5-$12 per dish, it’s both reasonably priced and a nice not to feel the need to crowd in for that peak 4 to 6pm typical happy hour period.