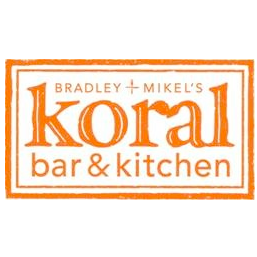 KORAL’s head chef, Peter Kelley, will take the lead in the open exhibition kitchen as well as assist Executive Chef Dickinson with menu development and day-to-day operations. The team also includes general manager Tracy Ducken, who has worked with Dickinson and Rogers at several Eastside restaurants.

Beginning Thursday, KORAL’s hours are 4pm to 10pm Monday through Saturday and 4pm to 9pm Sunday. A custom designed back bar will be open every day, from 3pm to midnight. Starting March 17, brunch will be served on Saturdays and Sundays, from 9am to 2pm.