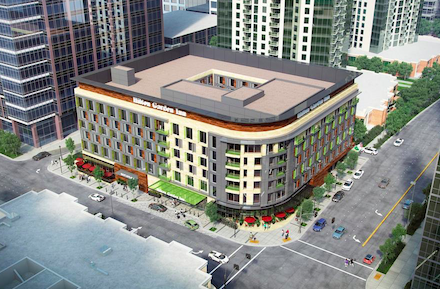 The property is located at the northeast corner of the block surrounded by 106th and 108th Avenues Northeast and Northeast Eighth and 10th streets. The property is owned by the Wasatch Group of Logan, Utah.

According to the publication, AJH Development Services is currently overseeing Bellevue development of a 234-room Marriott AC and a 384-room Marriott in downtown Bellevue. A spokesman for the company said construction for the Marriott AC, at 210 106th Place N.E., is expected to begin in early 2015. The other full-service Marriott is currently rising at 200 110th Ave. N.E., and is expected to be completed by the end of the year or early 2015.

The other two Bellevue hotel properties coming to downtown include a 245-room, four-star hotel by Kemper Development, part of a Lincoln Square expansion and currently under construction, is scheduled for a late spring 2017 debut.