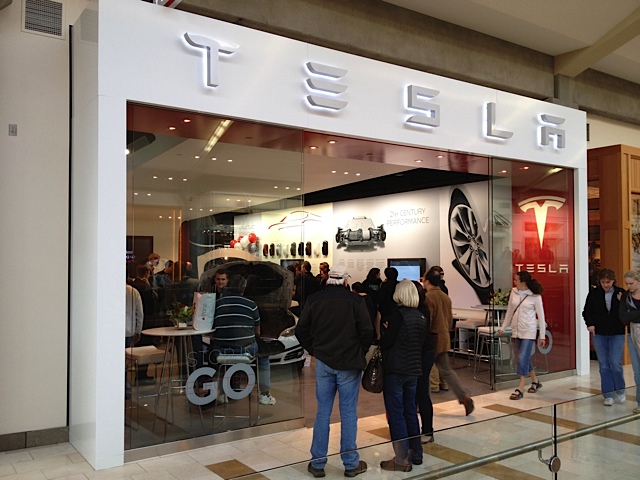 It must be closing in on Christmas because several stores have been opening in Bellevue Square as of late. Saturday was no different, as Tesla Motors opened their Bellevue Square store. Now, in addition to shopping, dining, and entertainment, you can purchase electric cars at the Bellevue Collection.

The Tesla store is very different from your traditional car dealership. The store is owned by Tesla Motors, instead of the common franchise business model. Also, don’t expect to see hundreds of Tesla cars in the parking lot. There is just one car in the showroom, or ‘store,’ and one car to test drive in the parking lot. Placing orders for one of the cars at the store can be taken care of as well.

The cars and showroom are full of technology. There are 4 touch-screen monitors that can help to everything from order a car to teach you about the different car models. The store has many similarities to the Apple Store, which is likely due to the store’s experience being designed by ex-Apple employees.

For their grand opening this past Saturday and Sunday, the store had the a beta of the Model S on display, which is Tesla’s new car that is scheduled to come out in Summer of 2012.

The Model S seats 5, and in addition, has room for 2 children in the back. The car can get up to 300 miles on one charge, but this isn’t your typical electric car. Once you get inside you’ll see a 17-inch touch screen that comes equipped with wireless connectivity that allows you to browse the web, use turn-by-turn navigation, and several other fun applications. In fact, the navigation system will be able to utilize applications that 3rd party developers create, making the opportunities endless.

The Bellevue Square Tesla store represents Tesla’s 15th store they have opened in North America. It is located on the 2nd floor, next to Clarks.