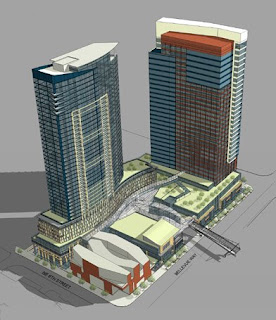 Plans to expand Lincoln Square in downtown Bellevue are moving forward, according to reports from the PSBJ.

Kemper Development Co. has applied for a building permit for the site at 410 Bellevue Way NE, south of the Bellevue Arts Museum, near the intersection of Northeast Fourth Street.

The planned $850 million mixed-use development will feature a 120-room hotel, a residential tower with 200 units, 392,000 square feet of retail space, 545,000 square feet of office space, and seven levels of underground parking, according to the report.

Kemper Development Co. expects it to take about 10 months before the city gives the nod to begin construction on the garage. The project was delayed in the middle of 2008, and at the time was expected to be delayed for at least 18 months. It appears now that construction will be no earlier than about 5 years after the initial delay.

Building rendering is from 2008