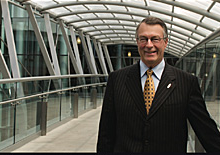 Freeman, who owns Lincoln Square, Bellevue Square, and Bellevue Place, had been a member of the Bellevue Downtown Association for more than 30 years – his father was one of the group’s founders – but he strongly disagreed with the nonprofit’s endorsement of the proposed East Link light rail, according to an article in The Seattle Times.

Freeman has hired experts to do his own traffic analysis regarding light rail. The article states that he favors saving tax dollars with freeway expansion and increased bus transit. However, Freeman said his resignation was not a “campaign of any kind or a personal vendetta,” but rather a “lack of alignment of interests” with the board.

Greg Johnson, chairman of the Bellevue Downtown Association board of directors, said the voters decided light rail should come to Bellevue, and the association has endorsed it, according to The Seattle Times.