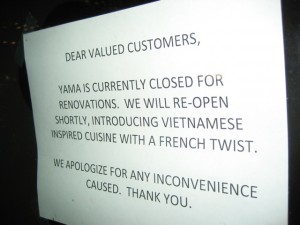 The doors are shut and the lights are off; Yama at Bellevue Galleria is closed as they undergo renovations, and they will re-open as a Vietnamese-inspired restaurant with a “French twist.”

Yama, up until now, had been a Japanese restaurant. Recently the establishment had transformed on some nights into a club with a DJ and other forms of entertainment, allowing club promoters to charge cover. Yama opened at Bellevue Galleria in December 2006.