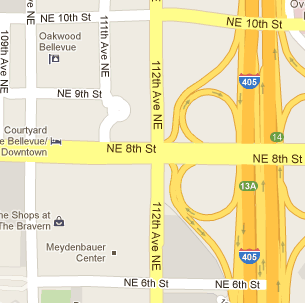 The Bellevue City Council on Monday considered whether an overpass or underpass for pedestrians and cyclists should be built at the intersection of NE 8th St and 112th Ave NE. These and other safety details were discussed during a briefing about a plan to ensure that access at Bellevue’s core is safe for motorists, cyclists, transit riders and walkers.

The Downtown Transportation Plan forecasts needed facilities for all modes of transportation around downtown between now and 2030. Projections for 2030, show employment downtown at 70,300, up from 42,525 in 2010, while the residential population is projected to reach 19,000 a 177 percent jump from the 2010 downtown population of 6,858.

The new plan could involve major projects such as new highway overpasses and streets and smaller details such as lane striping, traffic signal timing and crosswalks. The NE 10th St overpass and an added lane on NE 8th St between 106th and 108th avenues are examples of completed projects identified in the current transportation plan. These improvements are scheduled for completion by 2013. Other aspects of the plan show potential bike facilities including east-west corridor improvements on Main and NE 12th Streets and north-south corridor improvements on 100th, 108th and 112th Avenues NE.

Council members expressed interest in regards to making conditions safer for cyclists on 112th Ave, which is part of the Lake Washington Loop route and a key bike commuter route. The council also would also like to see improvements at the intersection at NE 8t St, with many lanes of traffic in four directions and on- and off-ramps for Interstate 405.